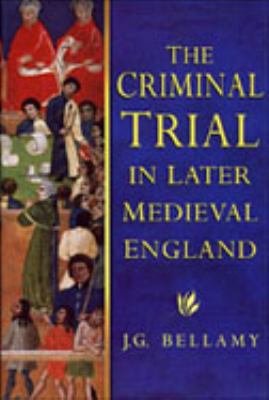 Book Description: This book represents the first full-length study of the English criminal trial in a crucial period of its development (1300-1550). Based on prime source material, The Criminal Trial in Later Medieval England uses legal treatises, contemporary reports of instructive cases, chancery rolls, state papers and court files and rolls to reconstruct the criminal trial in the later medieval and early Tudor periods. There is particular emphasis on the accusation process (studied in depth here for the first time, showing how it was, in effect, a trial within a trial); the discovery of a veritable revolution in conviction rates between the early fifteenth century and the later sixteenth (why this revolution occurred is explained in detail); the nature and scope of the most prevalent types of felony in the period; and the startling contrast between the conviction rate and the frequency of actual punishment. The role of victims, witnesses, evidence, jurors, justices and investigative techniques are analysed. John Bellamy is one of the foremost scholars in the field of English criminal justice and in The Criminal Trial in Later Medieval England gives a masterful account of what the medieval legal process involved. He guides the reader carefully through the maze of disputed and controversial issues, and makes clear to the non-specialist why these disputes exist and what their importance is for a fuller understanding of medieval criminal law. Those with a special interest in medieval law, as well as all those interested in how society deals with crime, will appreciate Professor Bellamy's clarity and wisdom and his careful blend of critical overview and new insights. 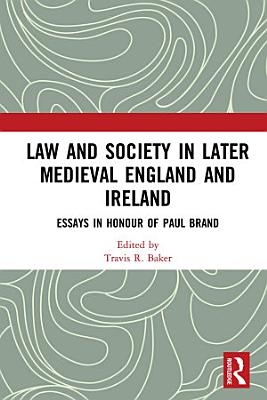 Book Description: Law mattered in later medieval England and Ireland. A quick glance at the sources suggests as much. From the charter to the will to the court roll, the majority of the documents which have survived from later medieval England and Ireland, and medieval Europe in general, are legal in nature. Yet despite the fact that law played a prominent role in medieval society, legal history has long been a marginal subject within medieval studies both in Britain and North America. Much good work has been done in this field, but there is much still to do. This volume, a collection of essays in honour of Paul Brand, who has contributed perhaps more than any other historian to our understanding of the legal developments of later medieval England and Ireland, is intended to help fill this gap. The essays collected in this volume, which range from the twelfth to the sixteenth century, offer the latest research on a variety of topics within this field of inquiry. While some consider familiar topics, they do so from new angles, whether by exploring the underlying assumptions behind England’s adoption of trial by jury for crime or by assessing the financial aspects of the General Eyre, a core institution of jurisdiction in twelfth- and thirteenth-century England. Most, however, consider topics which have received little attention from scholars, from the significance of judges and lawyers smiling and laughing in the courtroom to the profits and perils of judicial office in English Ireland. The essays provide new insights into how the law developed and functioned within the legal profession and courtroom in late medieval England and Ireland, as well as how it pervaded the society at large. 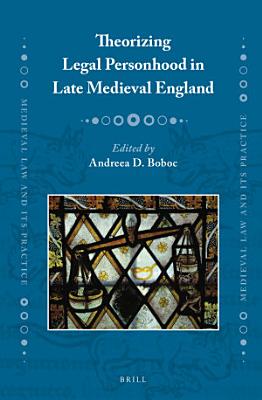 Book Description: Theorizing Legal Personhood in Late Medieval England offers an account of the fluidity and artificiality of legal personhood before the individualistic turn in law vis-à-vis juristictional pluralism. 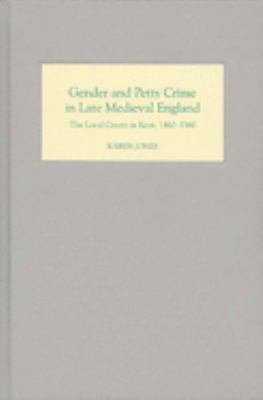 Book Description: First full-length study of the relations between gender and crime in late medieval England. 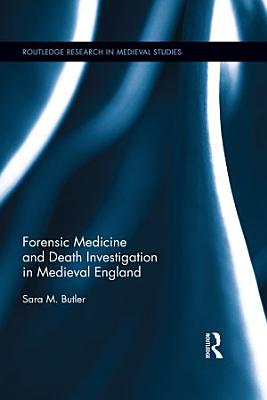 Book Description: England has traditionally been understood as a latecomer to the use of forensic medicine in death investigation, lagging nearly two-hundred years behind other European authorities. Using the coroner's inquest as a lens, this book hopes to offer a fresh perspective on the process of death investigation in medieval England. The central premise of this book is that medical practitioners did participate in death investigation – although not in every inquest, or even most, and not necessarily in those investigations where we today would deem their advice most pertinent. The medieval relationship with death and disease, in particular, shaped coroners' and their jurors' understanding of the inquest's medical needs and led them to conclusions that can only be understood in context of the medieval world's holistic approach to health and medicine. Moreover, while the English resisted Southern Europe's penchant for autopsies, at times their findings reveal a solid understanding of internal medicine. By studying cause of death in the coroners' reports, this study sheds new light on subjects such as abortion by assault, bubonic plague, cruentation, epilepsy, insanity, senescence, and unnatural death. 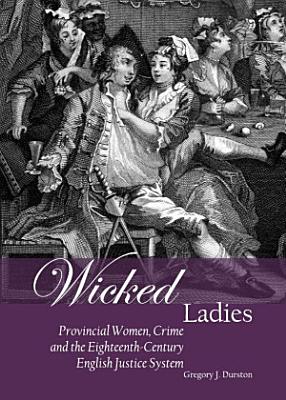 Book Description: In recent years, much has been published on women, crime and justice in English history. However, for a variety of reasons, particularly the ready availability of source material for the capital, such research has tended to have an overwhelmingly Metropolitan focus. This book aims to redress the balance for the ‘long’ eighteenth century by concentrating on women from outside the London area. Although vitally important to the wider country, the Metropolis always contained a small minority of the country’s female offenders and defendants, albeit a significantly higher percentage of the latter than its share of the national population. The capital also had a rather different criminal justice and policing system to that found in the rest of the country at this time. The book focuses on women’s experiences in provincial England as both the perpetrators of various crimes and as suspects or defendants in the country’s criminal justice system. The areas considered range from the West Country to the Scottish Border, and the offences examined include all of the major crimes, such as murder and theft, as well as some more arcane forms of deviance, including arson and coining. The factors that prompted women to offend, their likelihood of exposure when they did so, and their treatment before the courts and in the penal system are all considered in detail. In particular, the book examines the gendered differences found in female crime when compared to that of their male counterparts, and how women’s experiences of the era’s justice system differed from those of men. It also compares provincial women to those found in the Metropolis in these respects. Extensive use is made of primary sources in portraying the lives of female criminals from Kent to Cumberland, while comparison is also made with women from other parts of the British Isles and beyond, so that the respective roles of structural determinants and national ‘culture’ in crime and justice can be considered. 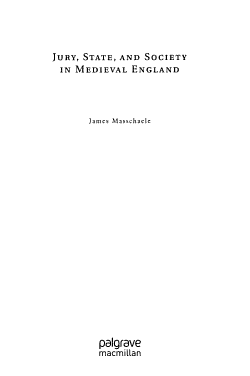 Book Description: In this new account of the historical formulations of the jury system - the first major study of the subject in over two decades - James Masschaele looks at how jurors carried out their numerous tasks, the role they played in the expansion of royal government, and the experiences of real medieval people who provided jury service."--BOOK JACKET. 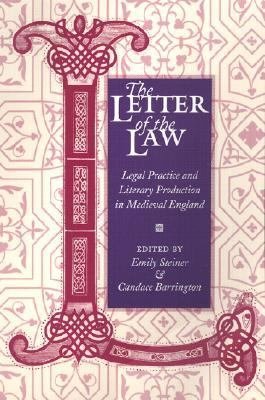 Book Description: Scholars have long been aware of the looming presence of law in medieval English literature, from Christ as a litigious redemptor to Chaucer's deal-making Host in The Canterbury Tales. Most scholarly work on the subject has been confined either to tracking down representations of legal practices in texts or to examining formal questions relating to legal discourse. In a groundbreaking departure, The Letter of the Law suggests that law and literature should be understood as parallel forms of discourse -- at times complementary, at times antagonistic, but always mutually illuminating. Emily Steiner and Candace Barrington maintain that medievalists are uniquely placed to make valuable new contributions to the subject of law and literature, in part because of the inherently interdisciplinary nature of the study of medieval law, inseparable as it was from political theory and theology. Treating texts as varied as Chaucer's Knight's Tale, the fifteenth-century Robin Hood ballads, and William Thorpe's account of his own heresy trial, the nine never-before-published essays in this volume reveal the intersections of legal and documentary culture with vernacular literary production. They establish that law and English literature were intimately bound up in processes of institutional, linguistic, and social change, and they explain how the specific conditions of medieval law and literature offer useful models in studying later periods. An appendix contains a translation by Andrew Galloway of History or Narration Concerning the Manner and Form of the Miraculous Parliament at Westminster in the Year 1386. 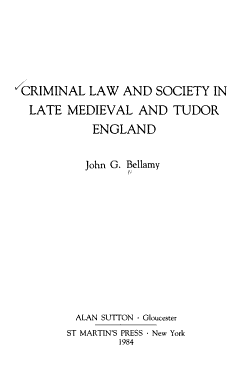 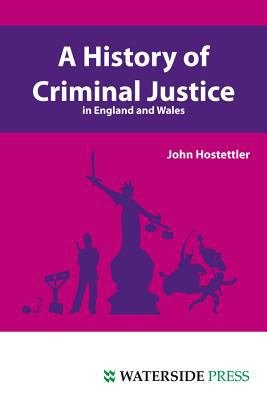 Book Description: "An ideal introduction to the rich history of criminal justice charting all its main developments from the dooms of Anglo-Saxon times to the rise of the Common Law, struggles for political, legislative and judicial ascendency and the formation of the innovative Criminal Justice System of today."-back cover.